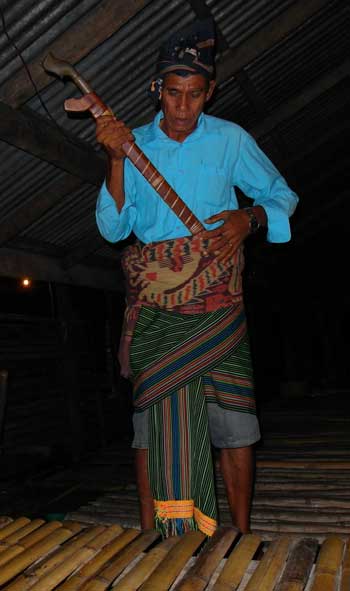 “Like throwing salt into the sea” : an Indonesian expression for futile activity. Called to mind by this banner at the airport in West Sumba. “Stop Violence!” proclaims the banner. It reminds us that, under a 1951 law, we can be jailed for 10 years for carrying sharp weapons without a permit. On the right of the banner, an illustration of some of the sharp weapons in question.

Enforcement of this law would depopulate the island. No self-respecting man in West Sumba is without one of these parangs; they are a core element of ceremonial dress, and in the last week I’ve seen them used to slaughter pigs, skin a horse, clear land, prune trees, whittle musical instruments, even sharpen a pencil.

But they are also used to make trouble. The first time I arrived at this same airport, Tambolaka, a local doctor gleefully showed me a photo on his hand phone of a body hacked up in the market in Waikabubak, West Sumba’s main town. “Look, that’s his hand, lying over there…” Local ceremonies in which conflict is ritualised — the pajura group boxing contest, held on a beach by the light of the moon, the pasola jousting war, which sees youngsters on galloping horseback sling spears at one another — sometimes turn nasty. At both of these ceremonies last week, young men were barred from carrying their parangs. Just as well; the Wanokaka pasola degenerated into a glorious riot of chest-puffing and stone-throwing. A few people and a police car got badly bruised, nothing more, but had the young bloods had their parangs on them it might have been nastier. Their elders, including Bpk Petrus, pictured below, still get away with wearing their weapons whenever they please. But it does raise something of a problem in areas of Indonesia where the carrying and use of potentially dangerous weapons is common. The police can hardly enforce the law selectively, and if they try to enforce it universally, their efforts will be slashed down by the custodians of culture as well as by the farmers and labourers who rely on their parangs for tasks large and small.