In theory, every child in Indonesia gets at least three years of English teaching in primary school, and several years more in middle and secondary school. So it’s initially surprising that the majority of Indonesian kids can manage nothing more than “Hello Mister!”, and the occasional “wossyonem?” Perhaps more surprising still that so many seem to aspire to English language graffiti.

Last week, I had an insight into why they don’t absorb more English. I was having breakfast with a primary school teacher in the Banggai islands in central Sulawesi. What time does school start? I asked. “Seven”. It was ten past. I raised an eyebrow. “It’s OK, I’ve told the school head I’ve got a guest”.

This did not seem OK to me, so I volunteered to come along to school and help with the English class. We got to school at 7.30; the grounds were awash with kids in their tidy uniforms, running around screaming as primary school kids are wont to do. Not one of the other eight teachers had shown up. My friend took her class (year one). I took years 4 and 6, since they were scheduled for English that day. Classes 2, 3 and 5 were told to go and sit quietly and study by themselves. After a couple of hours, the head teacher showed up. “I’m not supposed to teach, but sometimes I have to fill in,” she grumbled. No sign of any other teachers.

With teachers playing hookey like this, is it any wonder that even Indonesia’s vandalism is illiterate?

P.S. On the subject of Punk Rut, I was interested in this headline from the Jakarta Globe:

I suspect these punks of lacking conviction… 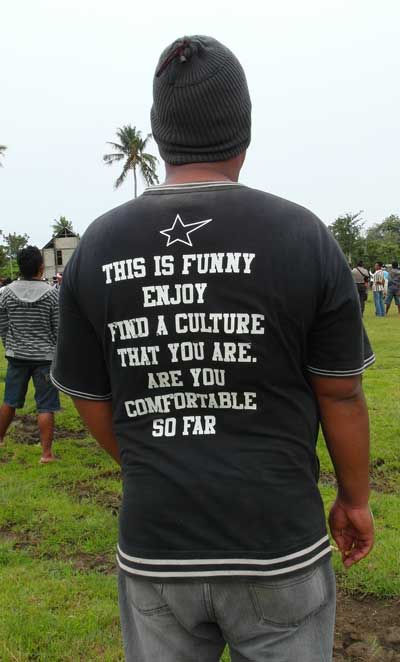 If I had the courage to stick my camera into people’s chests, I’d by now have a vast repertoire of photos of absurd and inappropriate T-shirts. Pretty young school-girls sporting obscenities that would make a punk blush. Elderly crones decked in gyrating boy-band idols. Moslem clerics declaring their love for Jesus. And plenty of slogans that just make no sense at all. Most Indonesians love to pose for pictures; it’s me that’s uncomfortable snapping things that will make people look silly. So I have to settle for what I can capture from behind. 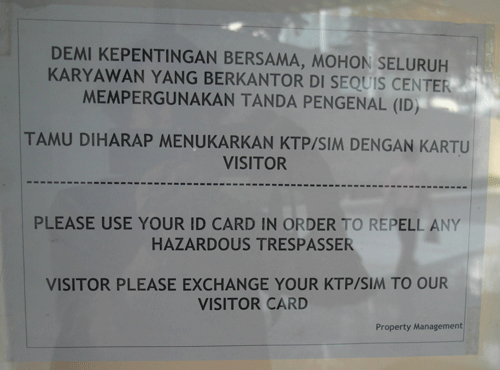 You can see the hazardous trespasser reflected in the glass. For what it’s worth, a more correct translation would read:

For our mutual well-being, please wear your ID card.

Perhaps they are worried about all the dodgy visitors going cap in hand to the top floor of the building, home of the Ford Foundation, which funds all sorts of hazardous enterprises, including programmes that aim to increase accountability in government.